What is Tarte au Sucre?

Sugar pie is a single-crust pie consisting mostly of brown sugar and originating in western European countries of Northern France and Belgium. What distinguishes the French Canadian version is the use of maple syrup instead of brown sugar. Brown sugar, in the earlier days was a rare product and unavailable in Quebec.

Gradually the French Canadian pie started to contain brown sugar and maple sugar which is most likely how you will find it made today. If maple syrup is used, it might be referred to as Tarte au Sirop d’érable (maple pie).

Première Moisson is a chain of artisanal bakeries that started in Vaudreil, Quebec. It offers high-quality French breads and many different types of pastries. Their Tarte au Sucre is to die for.

Au Pied de Cochon is known for its unapologetically gluttonous menu items such as Foie Gras Poutine and Duck in a Can. Save room for one of their traditional French Canadian desserts like Pouding chômeur or Tarte au Sucre. 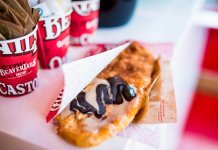 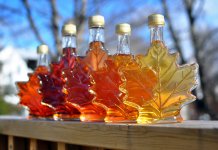