What is a mince pie?

Don’t be deceived by the title, a mince pie does no contain mince meat. On the contrary, a mince pie is a sweet British shortcrust pastry usually filled with a mixture of dried sultanas, cherries, brandy, cranberries, port and almonds called mincemeat. Mince pies are traditionally served during the festive season and these delightful treats are available in most stores. 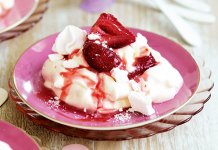