What is a Macaron?

A macaron is two meringue-based cookies made with almond flour, egg whites, granulated and icing sugar, that are sandwiched together with buttercream, ganache or jam filling. The cookie has a crunchy exterior, is almost weightless, and easily melts in the mouth.

Even though the French take credit for the macaron, it was likely brought from Italy, where it had been produced in Venetian monasteries since the 8th century. Nevertheless, France’s role in the macaron’s history is not to be underestimated, as it is where the sweet became especially popular. Macarons are now a French staple where you’ll have no trouble finding them at most French bakeries.

This coffee shop was established in 1862, and now has over 50 locations worldwide. This upscale bakery specializes in French macarons in a number of different flavors. 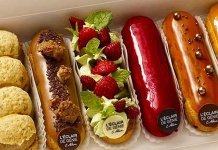