Sushi is a Japanese dish consisting of small balls or rolls of cold vinegared rice combined with seafood (often uncooked), vegetables, or egg. Styles of sushi and its presentation vary widely, but the key ingredient is the sushi rice. Sushi is often served with pickled ginger, wasabi, soy sauce and sometimes daikon radish as a garnish.

Sushi originates in a Southeast Asian dish, where fish was fermented with salt and rice to preserve its freshness. It was not until the Edo period (contemporary Tokyo 1603-1868) that fresh fish was served over vinegared rice. In the 1820’s, chefs started using raw fish in their sushi, known as Edo-style sushi. 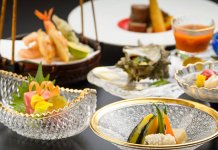