What is a New York-Style Bagel?

A New York-style bagel is traditionally shaped by hand into the form of a ring from yeasted wheat dough, that is first boiled in water and then baked resulting in a puffy bagel with a moist crust. The New York-style bagel dates back to the start of the 20th century when Jewish immigrants introduced bagels to New York. The bagel brunch also became popular in New York City, which consists of a bagel topped with lox, cream cheese, capers, tomato, and red onions.

Where to eat Bagels in New York City

Ess-a-Bagel specializes in hand made bagels with more than 20 cream cheese options, smoked fish, and other sandwich options. 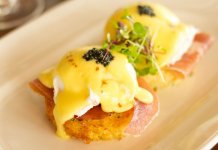